For the greatest tonal range achievable.

Platinum is an early photographic process in which an image is formed by actual platinum metal, unlike in conventional photographs where it is formed by silver. The process was popular in the late 19th and early 20th century, when commercially produced platinum paper became available. It was the medium of choice of great masters like Alfred Steiglitz, Edward Steichen and Paul Strand.

Modern platinum printing is an entirely hand-made process. It begins by preparing a light sensitive solution, which contains platinum and palladium salts. This solution is brushed on to specially selected art paper, dried and exposed in contact with a negative to ultra-violet light. The exposed paper is placed in developer, where metal salts are reduced back to a metallic state forming the image. It is then carried through a series of clearing baths. The print that emerges from the final wash consists of nothing but particles of precious metals permanently embedded in the fibers of the paper.

Platinum emulsion has a unique response to light resulting in the most beautiful tonal range in black & white photography. It also happens to be the only true archival photographic process. Platinum, long referred to as the noble metal, resists combining with other chemicals, which produces an extremely stable image. The platinum print will remain unchanged as long as the paper it is printed on exists, thus making the image virtually immortal. 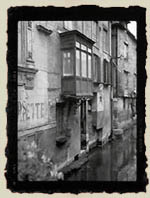